Understanding the etiology and impact of hypoparathyroidism

The symptoms and complications of HPT can be severe and persistent, posing a threat to multiple organ systems. Chronic HPT may also affect patients’ emotional well-being and quality of life.4,5

Watch: An Overview of Hypoparathyroidism

Endogenous PTH is a key regulator of mineral homeostasis.1,2 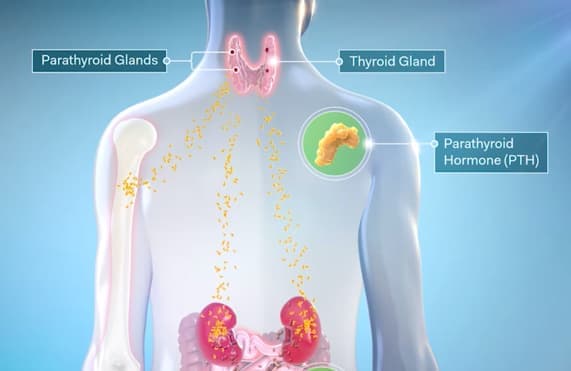 Endogenous PTH is secreted from the parathyroid glands in response to falling levels of circulating ionized calcium. When properly regulated, ionized calcium levels should not vary by more than 5%.6,7

Patients with HPT that is not adequately controlled can suffer from a high burden of illness.5

in the United States.8

Postsurgical HPT may resolve in a short time or become permanent. Chronic hypoparathyroidism can be diagnosed when low levels of endogenous PTH persist for ≥6 months.9,10

The second most common form in adults, autoimmune HPT may be isolated or part of an autoimmune polyglandular syndrome (APS).3

Genetic mutations may impact parathyroid development, PTH synthesis, or resistance to PTH in the proximal renal tubule. HPT may feature in some complex congenital syndromes, such as DiGeorge syndrome. Excess accumulation of iron (thalassemia or hemochromatosis) or copper (Wilson’s disease) are other less common causes.3

Radiation treatment for cancers of the head or neck, or radioactive iodine treatment may interfere with parathyroid function. In some instances, hypoparathyroidism may be idiopathic in nature.3,9